Remember how I love sandwiches? I do. I love them so much. They are really the ultimate comfort food for me. Probably because of the bread. Sandwiches on really good bread are hard to beat – hearty, filling, a little guilty – carbs! bah! But oh man. Some days a sandwich is just what the doctor ordered. I have had several of those days lately. 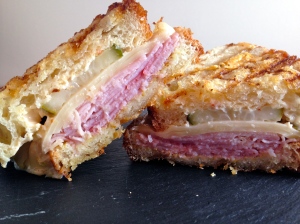 Sandwiches man, little portable stacks of heaven. And this one is particularly good and restorative. It’s sort of my makeshift version of a Cuban sandwich. I love Cubans. They are meaty and smoky and spicy and there are pickles. But they require roasted pork, which is lovely, but I don’t generally have it on hand. This is not a bad alternative at all, if I do say so myself. I made some chipotle garlic mayo to add smokiness and lots of flavor, and then I grilled it up. Pro tip, if you have a brick lying around, wrap it in aluminum foil and use it to weigh down your sandwich while you are toasting it up. Instant panini press!

Imma make this quick, because it’s late, and I have another very long day ahead of me tomorrow. I can’t wait for the weekend. But I had to share this with you, because it was so good. Better than I actually expected. The mayo makes it. Make a bunch, keep it on hand.

A public service announcement to the classless, ignorant mother-daughter duo in Grandstand 12 at Fenway for the Sox-Orioles game last night – there is no better way to incur my wrath than to belittle and harass my little sis and her gf for being who they are. Life is long, and if you want to spend yours making someone else feel small, know that it will all come back around tenfold. You should rue the day I find out who you are, because HELL HATH NO FURY like a protective older sister. I know a lot of big words and have no qualms about publicly shaming ignorant shitbags. I will also have a few choice words for all the cowards sitting around them that didn’t feel it was their duty to stick up for their fellow humans in the face of bigotry…

I have a new best friend. She is tiny and adorable and I can’t wait to spend A LOT more time with her. Welcome to the world Baby A. I adore you already.

So I actually got a little sad when I read this…because apparently the marriage itself and the fact that he is a famous person that I don’t actually know didn’t completely drive the point home that it probably wasn’t meant to be for us. But a kid, man. I guess it really isn’t happening.

What I am reading: Billy Lynn’s Long Halftime Walk by Ben Fountain. I am really enjoying it, though I haven’t found myself with much time to read the last 10 days.

2 slices of your favorite bread

Spread one side of each slice of bread with butter. Spread the other side of one piece of bread with mustard and the other with mayo. Stack the ham, cheese and pickles in between the slices of bread with the butter sides out. Grill the sandwich in a grill pan or frying pan over medium low heat until bread is toasty and brown and the cheese is melty. I like to press the sandwich under a weight to make it extra crusty. Enjoy! This sandwich is going to blow your mind.

1 smallish chipotle pepper in adobo sauce, minced into a paste

Mix all the ingredients together. Use on everything because you are going to like it a real lot.

Summer in a bowl

I have a post about fish tacos in the works but it is detailed and there are lots of accoutrements and it was taking me awhile, so I am going with this instead. I wanted to get a post out before I go away for the weekend AND I wanted to make sure I got this out while there are still delicious tomatoes to be had at the farmers’ market. If there is ever a time for using good tomatoes, this is it.

This is also the first installment in what will hopefully be another new feature on this here blog, which I will call Feels Like Home. I may have mentioned that we ate well growing up. Not fancy, necessarily – there were four of us kids, and two of us were not super adventurous, so I’m not talking about wild, fussy, earth shattering stuff, but very delicious, nonetheless. My plan is to share some of that with you all, if for no other reason than because that means that I get to make and eat them all again myself. They are all things that make me think of home…

This first one, ironically, is not really ever something I was particularly interested in eating when I was younger. I have realized, despite my insistence that I eat everything, that I actually have a fair number of weird food hangups. Every time I turn around on here I feel like I am telling you about something I don’t really love, or didn’t used to like, but whatever, I’m evolving. Gazpacho is a cold soup. Weird, and usually no thank you, especially since people looooooove to serve it in a shot glass, and in case you missed it, I DO NOT DRINK FOODS. I drink drinks, and I eat foods. I need a spoon with my soup. It is a food. BUT, as it turns out, my mom makes a really good, really crowd pleasing gazpacho. And she serves it in a bowl with a spoon. And with croutons. I think the croutons are what actually won me over.

This is so very easy. Essentially, most everything goes in the food processor, and that is the end of that. The only extra step is to blanch the tomatoes first to remove the skins, which takes less than a minute, and to make the croutons, which while technically are “optional” they are not at all optional and you definitely need to make them. Get some bread, it doesn’t even have to be good bread, any bread will do. Slice it about an inch thick, then cut it into cubes. Brown them in olive oil on top of the stove, or toss them with the oil and stick them in the oven until they get brown. Sprinkle them with salt – croutons! Make a bunch and keep them in tupperware for salads or soup or snacks. It will be the best thing you’ve ever done.

In addition to the croutons, I added avocado as a garnish and I do not regret it. I also added some Sun Gold cherry tomatoes because I had them. I hope Mom approves. The avocado in particular was top notch.

Basically, this is super easy. Make it while the tomatoes are still good. Hurry.

2 large tomatoes (about two pounds) (I actually used three medium Brandywines to get two pounds worth.)

One cucumber, peeled and roughly chopped

One roasted red pepper (from a jar is fine!) roughly chopped

Salt and pepper to taste (be generous with both!)

Croutons for garnish (and avocado, if you have it.)

Cut an X into the base of each tomato, and blanch in boiling water for about 15 seconds. The skins will peel off very easily. Remove the skins and the cores of each tomato.

In a food processor (you will likely need to do it in a couple batches, unless you have a giant, industrial sized food processor) combine all ingredients through the hot sauce, and process until almost smooth. (This is a matter of preference. I like it to be almost a purée, but if you like it a little chunkier, that’s fine! Run it through the processor for less time.)

Combine the vegetable mixture in a large bowl and add the olive oil, vinegar and the salt and pepper. Taste for additional salt, pepper or hot sauce to your liking. Chill well and serve very cold with croutons to garnish. Enjoy!!

1. I just finished reading Cassandra at the Wedding by Dorothy Baker and it was amazing. It was remarkably funny considering it is a book about a mentally ill, suicidal woman that goes home with the intention of ruining her identical twin sister’s wedding. It was witty, exhausting and really really lovely. I got it from Emily Books, an independent bookstore that sells e-books. They pick one book a month, often unknown books by women, that they feel very strongly about. It’s kind of great. And this book is so good. Read it.

2. Have I mentioned how I feel about Candy Crush yet? Basically it’s good that you have a limit five lives before they have to refuel, because without that break I could probably play Candy Crush for ever and ever nonstop, amen.

3. FOOTBALL. It’s back, and I am watching, and Wes Welker is a Bronco. That’s weird. He just dropped a fair catch kick return though. Oops. Good thing he’s not on my team.

Be good to one another.