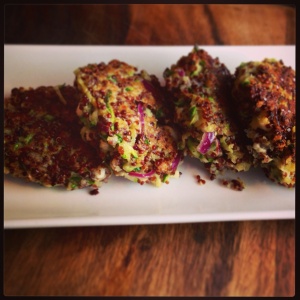 This was a fluke. It was my first day back from vacation and my grocery situation was bleak. A few things had unexpectedly survived in the crisper drawer, including a zucchini and a red onion, and I randomly had some feta cheese in the cheese drawer. I don’t generally care for feta cheese all that much, so I rarely buy it. I have no idea how or when it got in there, but I went with it.

I have made these thrice since.

You guys. These were so good. Stupid good. There was so much flavor here. They were way more than the sum of their parts. They tasted rich, like it took a long time for the flavors to develop. They were filling but still light. They were really really good leftover. Remember how I like to say I could NEVER be a vegetarian? These could sway me. (Though, full disclosure, the first time I made these I did cook the quinoa in chicken stock. It was goooood.) I pretty much ate these three or four times a week for three weeks AND I WOULD MAKE THEM AGAIN RIGHT NOW. I don’t know, I really don’t. It’s inexplicable.

1. I have purchased EIGHT BOOKS in the last month. EIGHT. I have read two, and they are not even two of the eight that I bought. But I can not say no to a Kindle Daily Deal. Actually, that’s not true. I can say no, UNLESS it is a book that is already on my list, or one by an author whose name I recognize. My purchases: People Who Eat Darkness, The Sisters Brothers, The Fifties (this was super random but got good reviews? I don’t know.) Bring Up the Bodies, Furious Love, Billy Lynn’s Long Halftime Walk, A Clash of Kings, and Beautiful Ruins. There’s a job somewhere that entails reading books and cooking all day right? Because I want it. I am IMMENSELY qualified. I will always be on time and I will read faster and cook more than you can possibly imagine. Salary negotiable. Thank you for your consideration.

2. I read A Game of Thrones. I held out a long time. I haven’t gotten into the show because I know it is really violent and I have a really hard time with violence and scary stuff. I am a wimp. I was (still am??) afraid of Large Marge in Pee-Wee’s Big Adventure. Remember when he is in the truck and the driver turns around and says “Tell ’em Large Marge sent ya” and turns into a scary cartoon…zombie face? Ghost? Ghoul? I don’t actually know BECAUSE I’VE NEVER ACTUALLY SEEN IT. I close my eyes. IT’S A CARTOON. I told you. I will be avoiding Game of Thrones the show thankyouverymuch. BUT, I was feeling left out, and I was assured that even though fantasy is not really my bag, so I thought, that I would really enjoy it. So I bought it. I read 800 pages in EIGHT DAYS. Eight work days. I couldn’t stop. It was awesome. (I actually hated the end. Just like the last paragraph, so literally, just the end. But I am sure it will redeem itself in the next book. Which I just bought.) It was great. It made me realize a couple of things: 1.) I would be a terrible fiction writer because I HATE bad guys. Mean people? Get rid of them. If I was a writer my protagonists would have literally no enemies. I can do life obstacles, I can totally get behind a good life obstacle story, but mean, evil people? No thanks, not into it.  My books would be Lannister-free. It would be all rainbows and friendship and happiness. 2.) I missed reading. Like really reading, and getting into a book and wanting to do nothing but that, and actually letting myself do nothing but that. I have to read more. It’s the best.

3. Neko Case’s new album is streaming on NPR prior to its September 3rd release. And that is what I will be listening to for the next couple of weeks. I just bought tickets for my mom and I to see her in November. I am very excited.

4. I just spoke to some of my favorite West Coast people, whom I miss terribly, and found out I will be heading to Nantucket with them at the end of September. Yay!

Ok, that’s all for tonight. I have to get up early and run. There are not enough hours in my day. Blerg. 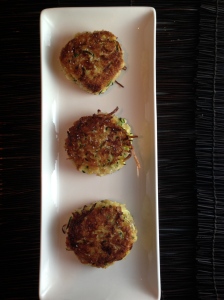 Quinoa Zucchini Cakes (serves 4 for lunch or a light dinner)

1 medium zucchini, shredded in the food processor or with a cheese grater (about two cups)

Generous 1/2 cup red onion, sliced into 1 inch pieces (to mimic the size of the zucchini shreds)

Salt and pepper to taste (don’t be stingy with either)

Oil (of your choice) for frying

Place the shredded zucchini in a fine mesh strainer over a bowl and salt generously. Let sit for 20 minute or so and then press on the zucchini to extract excess liquid.

Combine quinoa, zucchini, red onion and feta cheese in a large bowl and salt and pepper generously. Stir to combine well. Add the panko and two of the eggs and stir to combine again. Test the mixture to see how well it holds together. It should not hold together firmly, but if it doesn’t stick together at all, add the third egg and stir well to combine.

Heat a bit of oil, enough to nicely cover the bottom of the pan, in a frying pan over medium heat until hot. Form the mixture into cakes (About a third of a cup for each works nicely) and fry until deep golden brown and then flip and repeat on the second side. (About five minutes a side? The crispier and browner the better.) Repeat with remaining mixture. Serve with a salad or wilted spinach or just by themselves. THEY DON’T EVEN NEED A SAUCE.

Get ready for your mind to be blown.

2 thoughts on “Cleaning Out the Fridge: Quinoa Zucchini Cakes with Feta and Red Onion”