Pulled pork confuses me a little because from a cooking standpoint, if you are without a grill, this is a wintery food. The cooking is low and slow (overnight at about 275, which is as low as my oven goes) and the result is fall off the bone goodness that feels like a braise. But the result is all summer-barbecue-potluck-outside-hanging out to me. It tastes like summer, goes well with summer sides, and has kind of a 4th of July feel. So I guess really, make sure you have an air conditioner, so it doesn’t matter that it’s 85 degrees in the house when you have the oven on all night, or just stick to winter. Which ever best suits your fancy.

I’ve made this twice this summer. Once with my cousins for the cousin dinner on our family vaca (four boston butt roasts for 37 adults) and once recently, because my brother was in town and I figured he’d like it (just one smallish one for five adults, and I was afraid I wasn’t going to have enough.) Also because I didn’t take pictures of it the first go round, and I wanted to tell you all about it, so I needed to make it again. Both times I had some leftovers, and both times I made hash with them. Bonus.

Pulled pork is served in a couple of different ways, and I THINK I know which one I like better, but I suppose I could change my mind at any time. You will see it served with a sweet/spicy barbecue sauce finish, or you will see in served North Carolina style, which is a vinegar sauce finish. On the vacation I finished two of the roasts with barbecue sauce, and two of them with vinegar sauce. The second time, I went just with the vinegar. It is just so good that way. Maybe because sweet, sticky barbecue sauce has never been my favorite condiment? Not sure, but North Carolina style is the one for me. I think.

Pulled pork is really so easy, which is why I thought about it for the cousins’ dinner in the first place. I knew we could put the rub on it and cook it over night, come up with some sides that could be done mostly ahead of time (we came up with meat beans…oh meat beans, so good. I think normal people call them campfire beans, but really, meat beans is a more apt description, since there was no campfire but lots of meat…they are for another post, when my cousin sends me the recipe) throw together the slaw, and still spend the day at the beach, which was the point of the vacation, after all.

When I was originally looking for a recipe for pulled pork, I called the expert, and Pops mentioned that he used the Chris Schlesinger rub from his grilling cookbook. Chris Schlesinger owns a fantastic barbecue place up here that is so delicious, so I figured it would be tasty, plus, my cousin used to work there before we lost her to the far reaches of the Florida beaches, and I figured she would appreciate it too. It got such a great reception at the reunion, I didn’t change much up the second time, except I added a brine, because I felt like it.

The rub does not mess around. It is spicy. I was nervous it was too spicy when they first came out of the oven, but with the sauce and the slaw and the buns it does just fine, and the spice holds up nicely. It’s basically equal parts salt, sugar, brown sugar, cumin, chili powder and pepper, and then half as much cayenne and twice as much paprika. Tons of flavor.

The brine was pretty standard, water, salt, sugar, spices, but honestly, I am not sure it made a huge difference. 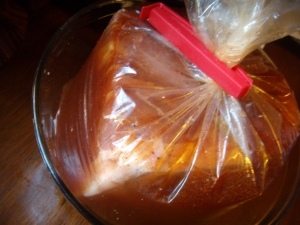 The meat went into the brine and into the fridge for 24 hours. The next night I went out after work and stayed out a good bit later than I anticipated. When I got home I rinsed off the roast, rubbed it vigorously with the spice rub, and threw it in a pan in the oven as low as it could go, and went to sleep. I woke up, got ready for work, and it still wasn’t quite done, so I had to make a quick run home a few hours into the work day to take it out of the oven, but it was all ok! Totally worth it. The pork comes right off the bone and shreds and the fat melts into it and it is all just so good. The nicest part about this is that you can turn it into a meal that is fairly quick to pull together and serve if you are having company, because even though it requires a lot of hours, it doesn’t require a lot of hours of actual work, and all the prep can be done ahead of time. My fam was coming over for dinner that night after work, my brother and his gf were in town, and I was able to easily make a basic slaw, add the vinegar sauce to finish, reheat the meat, and put together the rest of the sides (in this case, fried corn (a revelation, but not exactly haute cuisine…open and drain a can of Keebler’s Niblets corn. Saute three pieces of bacon, crumble bacon, add corn to frying pan with bacon fat, fry until delicious, add crumbled bacon back in. Serve.) and baked beans (in this case, open a large can of B&M. Pour into a pan. Add ketchup and mustard. Serve. Doesn’t make me proud, but they sure taste good)) and it feels like a quick weekday meal. The meat is spicy for sure, but the slaw and the rolls balance it out so well. The slaw that I like is a basic vinegar based slaw, not a creamy one. I love me some creamy slaws, but this one is nice, feels light, is a little sweet, and is good as a side on its own too. It gets rave reviews. I can’t figure it out, because there really is almost nothing to it. But it’s a hit. I think it’s all the sugar.

The boys, the girls and the moms-to-be were all pleased with this. Lots of clean plates in the group of 37 and the gang of 5. And, in both occasions, I used the leftovers to make hash. One of these days, I will tell you about hash, because it is easy and great for a crowd, uses leftovers and could be done the night before or the morning of. And it’s pretty… 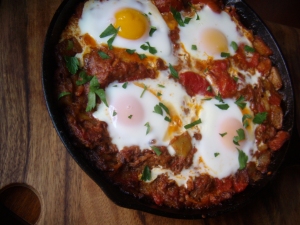 Pulled pork is a fun treat. It feels indulgent and like it took work. It is a crowd pleaser and it makes for very tasty leftovers.

Before I get to the recipes, I want to give a little hint as to the nature of my August project…

That was actually a big hint, and if you follow B&G on Twitter (@bandgmeg) or Facebook, you already know this, but I am pretty excited…it is day five and it is looking pretty good…full report to follow, of course.

What I am listening to these days: Josh Ritter The Animal Years pretty much blows my mind every time I hear it, my running mix is pretty pimp, and Toots & the Maytals is the perfect summer soundtrack…

What I am reading these days: Just finished The Hunger Games trilogy. That is some DARK young adult fiction, currently reading Kitchen Confidential which is making me simultaneously miss working in restaurants and wonder how I possibly survived, AND, I just restarted my subscription to the Sunday Times. Nothing makes me happier than waking up in the morning and having that outside waiting for me.

Hey, did you guys know it’s almost time for football? Guess what is perfect for football?! Pulled pork! Get to it! 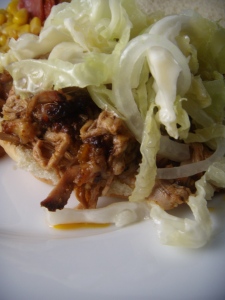 thanks to Chris Schlesinger for the recipe

Mix all the sugar and spices for the rub together and stir to blend. Place the roast, fatty side up, in a large roasting pan, and rub spice mixture onto roast, coating it well, and massaging into the meat. Place the roast into a low oven (250-275 degrees) for 8-10 hours, until the internal temperature reaches 200 degrees. The meat should be falling off the bone and easy to shred. If the rub on the outside of the roast starts to get too dark or crisp during the roasting, cover the meat with foil and continue until done.

Mix the vinegars, sugar, spices and hot sauce together and set aside. When the meat has cooled slightly, enough that you can shred it with your hands, pull the meat off the bone and shred. Pour the vinegar mixture over the meat (you may not need all of it, put the remaining aside for people to add to their sandwiches as they’d like) and mix well into the pork. If you are not serving right away, reheat the pork in a low oven until heated through. Serve pulled pork with hamburger buns and slaw (see below.) (NOTE: If you prefer a bbq sauce finish, that is easy enough! Skip the vinegar mixture, and mix pork with your favorite bbq sauce, and serve extra along side.)

3/4 cup canola or other neutral oil

Mix the cabbage and the onion in a large bowl, and toss with 3/4 cups of the sugar. Mix the oil, vinegar, remaining 1/4 cup sugar, mustard and salt in a small saucepan, stirring to combine. Bring to a boil and pour over the cabbage mixture. Toss to coat the cabbage well, and chill. Drain excess liquid off slaw before serving. (Note: this makes more liquid than you need. When I made this for 37, I used three heads of cabbage and only doubled the liquid and it worked quite well.) Slaw is best eaten the same day. It will brown quickly, and while it tastes fine, it is not nearly as aesthetically pleasing.