So I have some hangups (I know, you are shocked…)

I would like to think I am a pretty low stress, go with the flow kind of girl. And I know, at times, I am. Like the other night, when I was diligently frosting the very top tier of my very favorite cousin’s wedding cake after midnight on Christmas day, and somehow, I still don’t know how, the entire top tier ended up on the floor of my parents’ kitchen. It was like someone sucked the air out of the room. It was the emptiest silence I have ever heard. I looked down, and saw that luckily, the three beautiful layers with their blackberry buttercream filling had landed right side up still on their cardboard base, and that only the bottom layer had been smushed under the weight of the top two. I didn’t blink, I just picked up those top two tiers, straightened them out and put them gently on a new cardboard home, and went on my merry way. AND I DIDN’T EVEN CRY! If that is not low stress and go with the flow, then I am not sure such traits exist.

There are certain things, however, by which I just can’t abide. One of those things, my lovelies, is drinking things that are meant to be eaten. My dad has these adorable european style wine glasses that he uses for tastings at the store. He gave me a couple and they are just perfect for a glass of wine when you just want a little bit, or when you are cooking and don’t want to risk knocking over one of your stemmed glasses. They are very lovely for using them as intended, however, one time when I was home recently, he handed me a little glass of what appeared to be disturbingly thick and grey looking wine. It was my first course, a small amuse of white bean soup. Served without a spoon. I can tolerate a lot of things, but, umm, no. Soup is a FOOD, it is not a beverage. It is nourishing and sating, not refreshing and thirst quenching. It is to be eaten, not drunk* (edited-thanks Gram! I am not sure when I was supposed to have learned that, but if it was in 9th grade, I am sol, my teacher was, quite ironically, a drunk who barely made it to class. No wonder I had never read much Henry James before this weekend.) At any rate,  I am mocked for this by my dad to this day, but I needed a spoon. The soup was delicious, as are all things my dad cooks, but I am not sure I could have choked it down if I was forced to drink it. The thought gives me chills. No one has to point out that this is the dumbest hang up in the world. I am aware, but it is a hang up nonetheless. There are more inconvenient ones, undoubtedly, so I am ok with it. I just avoid those little passed gazpachos that always seem to show up in shot glasses at weddings and cocktail parties. Shudder.

That was pretty rambly wasn’t it? Welcome to my blog. These tales of woe actually have absolutely nothing to do with the most amazing tomato soup I have made recently, save to assure you that every time I have eaten it, is has been with a spoon, like any decent person would.

I love love love grilled cheese and tomato soup. It is one of the most comforting meals I can imagine. I am not sure how that came about, since I don’t recall eating it when I was little, but somewhere along the way I tried the combo, and it has become one of my most sought for meals when I am having a crapfest of a day. My standard for grilled cheese has always been white bread with Land O Lakes white American cheese. These I do remember from my youth. I have always loved grilled cheese, it is just the tomato soup part that came later. I may have picked it up in college, when the grilled cheese had been updated to mozzarella cheese. A mozzarella grilled cheese dipped in tomato soup is heaven. You should try it. Even though at that point, the soup was likely the canned variety. I suspect I made it homemade once or twice, but if I had to bet, most of the time it was the condensed kind in the red and white can. I would add some milk and be off to the races. And most of the time, it was just an outlet for dipping grilled cheese. When I ran out of sandwich, I lost interest in the soup, and would ditch the rest of it. All of that has changed. I have found a tomato soup that is so glorious that I ate a whole bowl of it by itself, with no sandwich in sight. It happened today at lunch as a matter of fact. And after I was finished, I continued to scrape the bottom of the bowl with my spoon to get any remaining drops of flavor. Had I been at home instead of in my cube, I might have licked the bowl.

This soup is a modification of a soup originally from Cooks Illustrated, but I found it on Smitten Kitchen. I am not totally comfortable with Cooks Illustrated and ATK. Sometimes their stuff just seems so overwrought. I don’t quite know what to make of it, except that it pretty much always ends up worth it, so they clearly know something I don’t. This recipe has some steps that I just didn’t do (and neither did Deb from Smitten Kitchen – and so I didn’t even include them in my version of the recipe) and I can pretty much guarantee, my soup was no worse for the wear. But overall it really is delicious, and the recipe did suggest the very novel idea of roasting canned tomatoes to intensify flavor. Which makes sense, because tomatoes are at their best in the summer, but cream of tomato soup is most definitely a cold weather food.

It starts with butter, shallots and tomato paste and the old standby, ras el-hanout…I need to get more of that and stat. 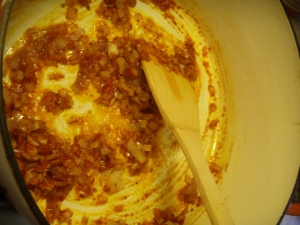 Actually, back it up, it starts this way… 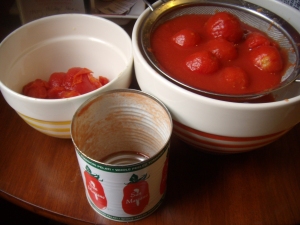 Drain the tomatoes, and seed them over the strainer. Then they go onto a cookie sheet with some brown sugar for roasting. Once the liquid has evaporated and the tomatoes are starting to brown they come out of the oven to cool. Then the butter, shallots, tomato paste and ras el-hanout in a saucepan. Once the shallots are soft, you add flour, chicken stock, the reserved juice from the tomatoes, and the roasted tomatoes. The soup gets boiled until the flavors combine, and then the whole mixture gets pureed with an immersion blender (this is where I strayed from ATK) and then cream and brandy are added.  Voila. Totally delicious.

brandy and cream. oh my.

Aside from the roasting of the tomatoes, the soup only takes about a half hour and is just so good. As I mentioned, most of the time my soup is accompanied by a tasty grilled cheese. The first go round, it was mild cheddar on ciabatta bread, which was really good, the second time, I had been oh so old-timey and I had made my own loaf of white sandwich bread, so I used that. Both times, there was mustard. I love mustard on my grilled cheese. That is a little trick I picked up from an ex-boyfriend, and I must say, I have to thank him for that. The other thing I picked up from him was an unflagging devotion to the Red Sox and Patriots, which sometimes feels more like a communicable disease, but the mustard was a great thing. Delicious.

So before I leave you to find something else to read – this is getting totally out of control, yesterday, I read A Homemade Life in its entirety, and then this morning I went back through and post-it noted all the recipes I want to try. I am going to be busy – I want to share my latest adventure here with you. We here at Bread & Ginger (and by we I mean me) are embarking on a free week(s). Free week is a little something I picked up while I was getting my act together and living with my aunt and uncle. My aunt has a tendency, like me, to stock up on a bunch of things at the grocery store, and then instead of planning and using it all up, ends up supplementing all the time, until there is a surplus of food in the house. And then she would institute a free week, in which she (and by extension, me) couldn’t buy anything for a week, and we just had to use what was in the house. It is both mortifying and satisfying that I am quite certain I can go two full work weeks from now and still have enough food to feed a small army. So I am having a free week. I am going to have to be creative, but I had my first very successful attempt at it tonight with a dinner of chickpeas with red onion and parmesan. What a revelation! When I bought six cans of chickpeas at Costco a couple of weeks ago I didn’t even know I liked them! If you wonder why I bought them at that point, I will agree that is a very good question, and a good illustration of why, when I told Molly I had gone to the grocery store, her first reaction was “no! You know you are not supposed to go there unsupervised!” But they were  good! So good in fact, that they will get their own blog post soon enough. And in case free week sounds dreadful and boring, I am going to supplement it with tales of cakes and flat breads that I made for brunch this weekend, so stay tuned. I will leave you now, as dishes and bed are calling my name.

Adapted from Smitten Kitchen, which in turn adapted it from The America’s Test Kitchen Cookbook.

2 large shallots, minced (about 1/2 cup) (so here’s the thing, in the original recipe they call for four large shallots. That is A LOT of shallot, way more than 1/2 cup. I adjusted)

Salt and pepper to taste

Preheat oven to 450°F. Line a rimmed baking sheet with foil. With fingers, carefully open whole tomatoes over strainer set in bowl and remove seeds, and reserve strained juices. Spread seeded tomatoes in single layer on foil and sprinkle with brown sugar. Bake until all liquid has evaporated and the edges of the tomatoes begin to brown, about 30 minutes. Let tomatoes cool slightly, then peel them off foil; transfer to small bowl and set aside.

Heat butter over medium heat in large saucepan or dutch oven, add shallots, tomato paste and ras el-hanout. Reduce heat to low, cover, and cook, stirring occasionally, until shallots are softened, 7 to 10 minutes. Whisk in flour and stir constantly until combined, about 30 seconds. Whisk in chicken stock; stir in reserved tomato juice and roasted tomatoes. Cover, increase heat to medium, and bring to a boil. Reduce heat to low and simmer, stirring occasionally, until flavors combine, about 10 minutes.

Puree soup until fairly smooth with an immersion blender. Add cream and simmer for a minute to allow flavors to combine. Turn off heat and add brandy and serve. Soup freezes and reheats well (I even did it in the microwave with no ill effects.)