As the story goes, I read quite early. I imagine my proud parents thought that this was a harbinger of good things to come, and an indication of my promising potential. As it turns out, I think it was mainly an indication that their oldest child peaked at four. (They’ve managed to hide their disappointment.) Case in point – yesterday, after work, I was attempting the simple tasks of blanching tomatoes and constructing wontons for my soup, and I managed to burn myself, pour boiling water on myself, and start a grease fire. It was really more of a flare up I guess, since no fire engines were called, and my initial shocked reaction of dropping the pot top that I was holding back on to the pan put it out, but still, it could have been ugly. That’ll teach me to cook oil over high heat in a pan that is too small to do such things. So there. You know what? I might make bad decisions regarding cooking with oil, but I can still read the hell out of anything.

The grease fire incident came about because I needed a way to taste test my wonton filling before I created all my soup wontons, and since the filling had raw chicken in it, I needed to cook it to taste it. I decided to make one wonton and cook it like a pot sticker, taste it, and modify the filling accordingly. Oil in the pan, wonton in the oil, brown it up, add water, cover the pan, remove the cover to check on the doneness of your little wonton, watch the oil conflagrate, yelp in fear and dismay, immediately drop the top back on the pan in abject horror (the right thing to do, as it turns out, but certainly not what I was thinking at the time, I’m pretty sure) turn the flame off, thank goodness that your extra sensitive smoke alarm is actually not on the wall where it belongs at the moment, remove wonton from the pan, marvel at the fact that it is not totally incinerated, try to taste for flavors amongst the tangy essence of charred grease, and then season wonton filling appropriately and giggle at your own idiocy. Voila! And all this time I was worried about deep frying, while what I should have been worried about is the perils of cooking with two tablespoons of canola oil. Next time, I think I’ll use the big girl pan, instead of my little bitty 8″ skillet and a high flame. It was an exciting new experience indeed, but not one I need to repeat.

The wonton filling was pretty good, although there is a bit of a bitter taste in there, maybe from the cabbage? that I wasn’t in love with. This was originally masked by the char, methinks. But other than that it was pretty tasty. I made up 16 wontons and have about 800 wontons worth of filling left to freeze for another time.

enough to last a lifetime

I have absolutely no concept of volume when I am creating. I can’t bother to think of such trivial things!

I used some of the frozen stock from last week, 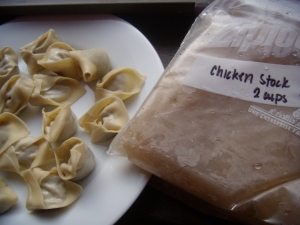 added some soy sauce (too much as it turns out I think, and I never thought too much soy sauce was possible) cut up some bok choy,

some carrots and scallions and there you have it. Wonton soup, with a little extra goodness from the bok choy and carrots. It was quite tasty, and a lovely, healthy (calories and fat wise, not so much sodium wise) if a little salty soup for dinner. I didn’t measure the soy sauce that I added to the broth, but it was a lot. It was unnecessarily salty, though not unpleasantly so. And since I am a salt-hound, I can only imagine what others would say. I think I would start with one tablespoon of soy sauce for 6 cups of broth, and then add more from there. I got carried away and I am guessing I added about three. Two would have been perfectly sufficient, and that is what my recipe will say…but overall, this was a good, and good old Meredith said she couldn’t think of any way to make it better, so there you go. I knew I would like having her around… 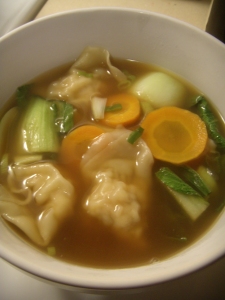 The other task at hand yesterday was blanching approximately 9 pounds of tomatoes that I obtained in my CSA share. I am going to make sauce to freeze and maybe do some canning if I am so emboldened this weekend. I’ve never done that before, I imagine it would be quite the blog post.

I put an X in the bottom of each tomato, to help remove the skin post blanching, and then I got artsy and proceeded to take more pictures than necessary of them. 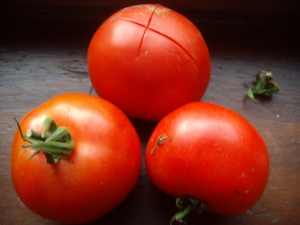 And that is just a representative sample! I do think tomatoes are particularly gorgeous and fun to take pictures of… and after just a few short minutes and one burn to the arm, they looked like this…

I'll call this one "skinless"

Into the fridge they went for sauce making this weekend, which will be a hoot. Also on tap, fried rice, more roasted beets and some sage pasta experimentation…and a 14 hour marathon of House! Woot! I love long weekends!

16 chicken wontons (or any kind of wontons you would like)

2 heads(?) baby bok choy, trimmed on the top and bottom and halved, then sliced into 1/2 inch pieces

Heat chicken stock to a simmer, add soy sauce, ginger, bok choy, carrots and scallions and cook for 5 minutes. Add wontons and cook for another 5 minutes until wontons are cooked through. The skin will become wrinkly and transparent and the wontons will float at the top. Spoon into soup bowls and serve.

One package of wonton skins

Put the water chestnuts, mushrooms, scallions, ginger, garlic and cabbage in the bowl of a food processor. Pulse until mixed and fairly uniform size. Add the chicken and soy sauce, and pulse until chicken is minced. Keep wonton skins covered with a damp paper towel as you are filling them. Lay a wonton skin on a plate and place about 1 tsp of filling in the center. Have a small bowl of water near by. Dip a finger in the water and run it along the edges of the wonton, and then fold one side over the filling to meet the other side. If your wonton skins are square, they should be folded corner to corner to form a triangle. If they are round, you can fold them any which way you would like. Try not to let the filling squeeze out of the edges, as it will interfere with the seal, but press around the filling towards the outer edges gently to get rid of any air bubbles. If you would like, wet one of the corners on the long side of the wonton, and fold it over the meet the opposite corner. Your dumplings will look like this. 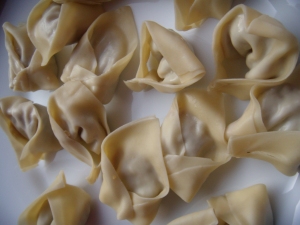 I prefer wontons folded this way for soup, but if I am cooking them like a pot sticker (that is to say, in the manner to cause a grease fire) I like to leave out the second fold and leave them as triangles. Honestly? Potstickers do not typically cause grease fires. I make them a lot, and never once have I had that experience. Just use a pan that is big enough (a saute pan with slightly higher sides would also be a good bet) heat some oil over medium high, put the dumplings in the pan to brown, add a couple tablespoons of water per batch, cover and turn the heat down as they steam. Once they are cooked through, serve them with soy sauce mixed with a dash of sesame oil and some scallions for dipping and enjoy.

I am guessing the wonton filling will actually be enough for 40 or 50 dumplings, but that is only a guess. I am also guessing that the wontons would freeze pretty well for keeping.

PS: For the entirety of this post, as I was typing, I spelled wonton “wanton.” Not sure if I was feeling particularly wanton, or if this is just another example of the downward trajectory I have been on since the age of four.